Mining is the process used to obtain valuable resources from the Earth. This is done to acquire supplies that cannot be produced or manufactured through artificial methods. There are numerous techniques to extract these materials. The most commonly used procedures are underground mining, surface mining, placer mining and in-situ mining.

Surface mining accounts for over 60% of the world's total mineral production. It is predominately used for obtaining minerals such as aluminium, coal, sand, copper, and iron. Surface mining methods are separated into two overarching categories: mechanical and aqueous. Mechanical methods rely on breaking the ore through mechanical means, whereas aqueous methods use water or another liquid to break down the ore.

There are three main types of surface mining used, each with specific variations of extraction, depending on the resource being obtained. These methods are strip mining, open-pit mining, and mountaintop removal.

Open pit mining is generally the cheapest way to extract ore as it does not require as much expensive equipment such as ventilation and larger machines can be used. It is also easier for miners to have access to minerals. Explosives are used to create colossal craters, in which heavy machinery is then used to section the crater into separate divisions where the ore becomes more manageable to extract from. The ore that is dug and removed to form the pit is often called overburden, which is hauled away to a waste area. Open pit mining is used to extract materials which sit towards the surface, where the overburden is thin. primarily metal and nonmetal minerals such as iron and diamonds. Building materials such as marble and granite are often extracted from open pit mines which the mine is often called a quarry.

These mines often continue until they become too large to maintain and extract materials from or where the overburden has become too much to operate. These are often then converted to landfills due to the economic burden maintaining the mine would take.

Advantages of open-pit mining include

The main advantage is that open pit mines are far cheaper than other methods. This is because they allow for the use of much larger equipment. This not only means faster production but also can allow for the potential of more revenue.

However, open pit mining can have setbacks, especially with the weather. If climate conditions are bad, operations may have to be seasonal. If in a heavy precipitation climate, the mine can be prone to flooding and therefore cause a huge hindrance when mining. Furthermore, disposing of the overburden can also be a liability to production and can produce a huge amount of air and water pollution. 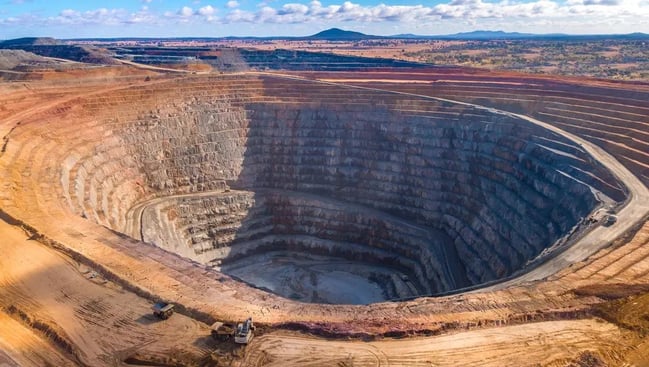 Strip mining is commonly used to obtain coal and is very similar to open pit mining in terms of the process of removing sections of the surface to unearth materials. However, strip mining is horizontal slicing rather than digging vertically like an open pit.

The first step of strip mining is usually the removal of trees and vegetation in the proposed mine area, which is usually done through heavy machinery. Again, very similar to open pit mining, explosives are then planted to loosen the surface. Rather than the overburden being hauled away to a waste dump like open pits, it is moved into a neighbouring unused mine.

When operating, mined strips are used to hold the removed overburden from the below row. This makes it easier to control the production of the mine as only a small portion is being worked on at a time.

Strip mining is an extremely advantageous technique to use as materials are retrieved at a rate of 90% during strip mining. It also does not have the lengthy process that underground mining has such as digging tunnels.

However, the effects of strip mining are some of the most detrimental. One of the main issues with strip mining and surface mining, in general, is the devastation it causes to the environment and habitats. As strip mining removes enormous amounts of vegetation many plants and animals are often threatened and die due to the devastation caused. It also threatened the landscape as it increases the vulnerability to cause corrosion and flooding.

Mountaintop removal mining is an efficient way to extract coal due to effectively accessing more coal while also keeping the number of employees low. This is a process that does exactly what it says on the tin. It eradicates the top layer of a mountain through explosives, which exposes the underlayer of coal. There may be multiple seams of material. If so, this requires more of the mountain to be destroyed to obtain the coal. The overburden created from the explosion descends the side of the mountain into surrounding valleys or streams which are called ‘valley fills’.

Once mining and extraction of the coal have taken place, the coal is cleaned before it is shipped. The final step is to help restore the land to what it once was, hoping that vegetation returns.

Mountaintop removal, due to the explosive nature of the method, can have an impact on human health and the populations that encompass the mines. This impact can be through contaminated drinking water or being exposed to chemicals and dust in the air. Although very similar, surface mining techniques all have different methods and advantages to using them, especially depending on where and what you are extracting. Surface mining is beneficial due to lower financial cost, as well as all-around safety in comparison to underground mining. However, being above ground, means there are far more threats to the environment and having an impact on humans.