Mining is the process used to obtain valuable resources from the Earth. This is done to acquire resources that cannot be produced or manufactured through artificial methods. The most common assets mining is used to extract are non-renewable sources such as fossil fuels, minerals, and water. However, mining is not just going underground and digging out the materials, there are different ways mining can be conducted; the main four recognised methods that are most used are underground mining, surface mining, placer mining and in-situ mining. The type of technique used depends on the type of resource that is looking to be extracted and the area looking to be dug as different types of rocks need different types of support to make removing the minerals safely.

In this blog post, I will discuss some of the different processes of underground mining, one of the four main mining methods.

Underground mining is commonly used to obtain materials that have high economic value as they are located deep below the surface of the Earth’s crust. They can dig as deep as 6,500 feet below the surface; however, these are often extreme cases and used to reach rare materials such as uranium. The entry into the underground mine is usually situated through a tunnel, known as a shaft.

Due to the nature of this method, underground mining requires a lot more preparation due to the safety measures that need to be put in place while procedures are undertaken. These can include ventilation shafts to keep the air clear from toxic fumes, escape routes, ore-transport tunnels, and communications systems to send information from the bottom of the mine to the surface.

Most underground mining techniques include drilling holes into the ground and using explosives to create tunnels, making drilling, extracting, and gathering the raw materials simpler. However, there are still various types of underground mining based on the shafts used, the techniques of extraction and the composition of the surrounding rock.

The most common underground mining technique is room and pillar mining. This system is used for relatively flat surfaces where miners can drill ore into ‘rooms’ to create ‘pillars’ of untouched ore which is left for roof support. These rooms can be mined out through charge and blast techniques, but more modern mines use a continuous miner drill to create the rooms. Room and pillar mines are created on a grid basis to make ventilation planning easier. Also, if the pillars are too small, it could lead to the surface crushing the pillars due to weakness, so planning the mine layout is crucial to the success of the operation. Compared to other mining techniques, room and pillar mining reduces the risk of surface subsidence. Once the development of the mine has been completed, extraction of the minerals begins. Retreat mining is often the final stage of room and pillar mining. Once the deposit has been acquired from the ore, the pillars are pulled down allowing the roof to collapse. Pillars are usually removed in a particular order starting from the further pillar from the shaft, to reduce the risk this can cause to workers.

Rather than drilling into ore, longwall mining is the process of shaving off slices of the ore which then drop onto a conveyor, carrying it up to the surface of the mine. A longwall mining machine has a roof support mechanism in the machine. Whilst the machine slices into the ore, the support system moves with it.

This process is typically carried out in softer rocks. In hard rocks, a similar method is carried out, but drilling and blasting are used to remove the seam in which the ore is then scraped. Also, roof support is not provided by the longwall machines, but by hydraulic props, rock, or sand fill. Longwall mining can recover up to 90% of the available ore however, the room and pillar typically only recover 50%.

Once complete, A worker then uses a drill to create horizontal slices through one side of the ore to the other. Once sliced, waste materials are then spread into the cut in the ore, creating a new level for further mining. This method then continues till the top of the surface is reached. 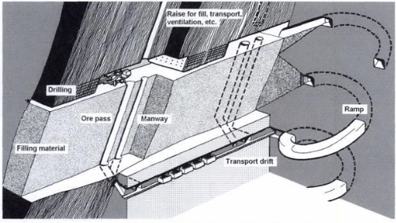 Cut and Fill mining is strictly used in hard rock mining as it doesn’t have the ability to include support mechanisms like a room and pillar which is interchangeable between hard and soft rock.

Block caving is a mining method which involves undermining the ore body, leaving it to gradually collapse under its own weight. Block caving is the underground version of open-pit mining and is often used to extend mine life and extract additional materials. As the ore progressively collapses, miners extract the minerals from there. 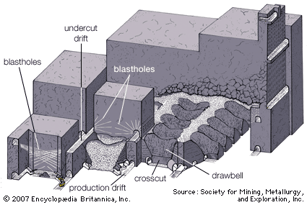 The advantages of block caving are that it is about 10% cheaper than other traditional mining methods. Drilling and blasting costs are far less and there is also no need for any waste disposal units. Block caving is the only underground method that offers the same levels of production as open-pit rates and running costs. However, due to the nature of letting the rock fall itself, it is highly unpredictable and therefore the expected results may delay and have a negative impact on earnings.

Although these underground mining methods are all conducted in a different way, they are the most used techniques and are often the most efficient methods in producing minerals. 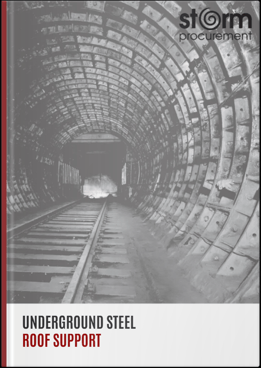